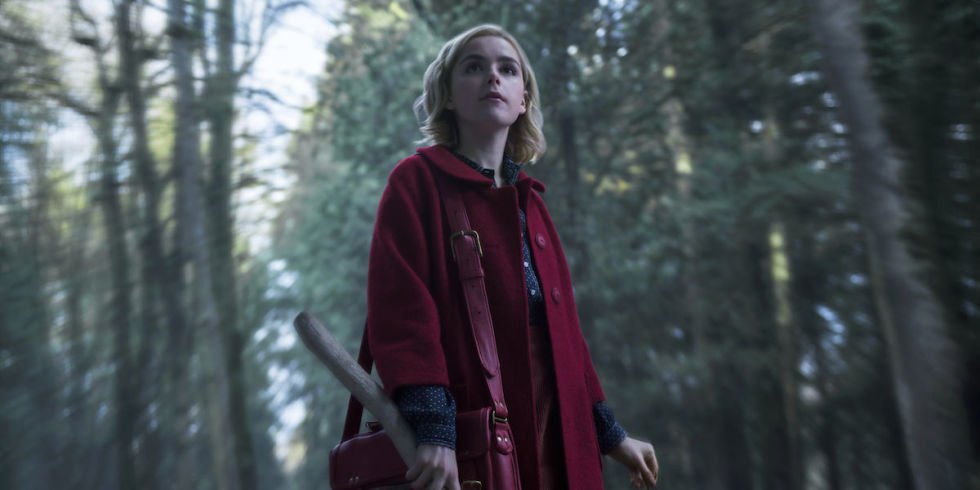 I never watched Sabrina the Teenage Witch back in its heyday, though I was aware of it. I probably wasn’t its target audience, as it skewed a little younger than Buffy the Vampire Slayer, which started in the same year and also enjoyed seven seasons. However, when I saw the trailer for the rebooted Chilling Adventures of Sabrina, I was instantly intrigued. It brought back vibes of Buffy, but fresher, edgier, and much less 90s. Something modern, even whilst immersed in Riverdale‘s ambiguous period setting.

I must admit to not being initially hooked into CAOS, a sobriquet I only realised after looking into the Sabrina fandom. It seemed more sweet than spooky, and whilst I preferred Kiernan Shipka to Melissa Joan Hart‘s Sabrina, her beau Harvey was a damp rag. Overall the pilot had a bit of a wishy-washy, will-she/won’t she feel to it, with Chance Perdomo as Sabrina’s warlock cousin from England as an all-to-rare highlight.

However, showrunner Roberto Aguirre-Sacasa wove a plot that built by degrees, and got darker by increments, without betraying any of the character notes first established. The relationships deepened and shifted, digging deeper into richer soil. The sweet became less sickening, the darkness encroached from all avenues. The plots and schemes of the dark and powerful succeeded, with a slow burn and increasing horror.

After the satisfying end of season one, there are plot lines unresolved, but there was definite progress. In all characters, not just in Sabrina herself, who went from baby witch, full of indecision, and became something else, something… a little wicked.

Season two was filmed back to back with the first season, so we only have to wait until April 5th until some of the mysteries are solved. But, to keep the hellfires burning A Midwinter’s Tale, a new, standalone episode of CAOS premieres December 14th!

The Church of Night, like all covens, celebrates the Winter Solstice — the longest night of the year — when families gather together around the Yule Fire to sing pagan carols, tell ghost stories and huddle against the supernatural creatures that come out to cause mischief. Since the Winter Solstice is when the veil between this world and the next is at its thinnest, it’s the perfect time to conduct a séance — which Sabrina convenes, to try and contact her mother. But the holidays are also a time for guests and visitors — both welcome and unwelcome — and you never know what might come down the chimney.

I was surprised when Riverdale was as successful as it was, but having watched Sabrina, I get it. This is cult viewing, where even if there are story elements, the characters draw you in. The acting is superb, especially from Shipka, Miranda Otto and the always brilliant Michelle Gomez.I see no reason why Sabrina can’t burn as bright as hellfire, for as long as the writing and acting stays this sharp. CAOS is a top TV show for 2018.

Update: I found this great list of easter eggs and horror movie references that can be found in Sabrina!

Story of a Script: Arrival