Say what you like about Zack Snyder, but that man knows two things exceptionally well: montages and marketing. So, when struggling mobile-only social network Vero needed a brand ambassador, they knew where to go. While he’s taking a bit of a career break, he’s got plenty time to take their money, emblazon his name on their site, and create the short film Snow Steam Iron.

Finding the short film is an exercise in frustration. There’s no direct link to it, you need to sign up to Vero, which you can only do on your phone, then browse to Zack Snyder’s page, and manually scroll down the videos until you find one helpfully entitled ‘Thanks to everyone who worked so hard on this. #SnowSteamIron.‘ 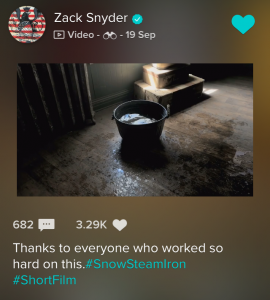 The synopsis is as follows:

Snow gently falls on the blood-stained streets of a seedy out-of-time New York City. Steam envelopes the nightmare unfolding within its narrow alleys. Iron is the will of the one who would dare to resist… fight… survive.

What can I tell you? It’s four minutes long, shot for next to no money, with the assistance of family and friends. This ‘out-of-time’ tale of violence and pornography is beautifully shot, belying the fact it was shot on iPhones.

Sadly, it essentially just a series of tableaus and scenes of menace. It’s a montage of imagery, a ‘story’ told out of order, stylistically reminiscent to Sucker Punch.

Considering the thinness of the material and the difficulty of actually getting to it, I’m not sure many people will go to seek this out. However, there’s no denying that if you have some pretty basic equipment and some friends and family willing to help you out, that short filmmaking is definitely within your grasp!